Can Dogs Eat Tuna Fish? What Are the Risks? 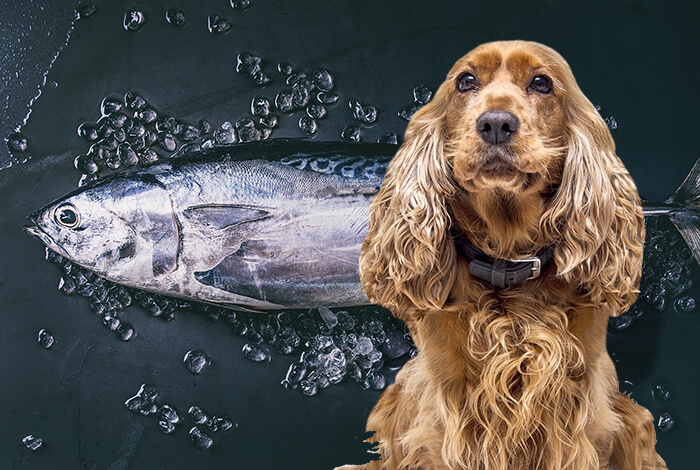 Yes, tuna is safe for dogs to eat; tuna is one of the world’s most popular and widely commercialized fish. It is used as an ingredient in many commercial dog food also. It contains plenty of proteins, healthy fats, antioxidants, and other nutrients that ensure a dog’s good health.

Tuna can so be shared with your canine buddy. However, it should be done with caution to avoid the adverse effects that may develop.

Is tuna good for dogs?

It is widely known that tuna is loaded with omega-3 fatty acids and is an excellent source of protein. Plenty of antioxidants, vitamins, and minerals are found in it as well. These include vitamins B3, B6, B12, and D. Tuna is also full of choline, iodine, magnesium, potassium, phosphorus, and selenium.

The following are the health benefits that these essential nutrients offer to your dog:

Tuna might sound like a nutritious snack for dogs. However, it is important to remember that it also has its downsides, which can lead to serious health issues. That’s why experts advise dog owners not to take the risk of feeding tuna to dogs.

So, is tuna bad for dogs?

There are a handful of health concerns when it comes to giving dogs tuna. While the fish is known to have an abundance of health benefits, it also poses several potential dangers, including:

Nowadays, the sea is highly polluted due to the burning of fossil fuels, the presence of countless factories, forest fires, and volcanic eruptions. These largely contribute to the increase in mercury, a heavy and toxic metal, in the water.

Long-life fish such as tuna are prone to accumulating high levels of mercury in their bodies over time. That’s why eating tuna excessively is a health risk for dogs and humans.

It puts pets and us alike in danger of mercury toxicity. The symptoms of this illness that you should look out for are:

If your dog shows any of these signs, bring him to the vet immediately. However, there are no known reports of dogs experiencing mercury poisoning due to eating tuna, but it is always a good idea to be cautious.

Should you choose to serve tuna to your furry friend, mind what type you choose. Of the 20 species of tuna fish, only 5 of them are frequently present at the dinner table. They are albacore, bluefin, bigeye, skipjack, and yellowfin.

It is advised that you opt for skipjack or albacore as they contain lower amounts of mercury. Or you can choose other fresh fish for dogs that are safer to eat than tuna. Consider buying Arctic char, flounder, herring, salmon, or whitefish instead. 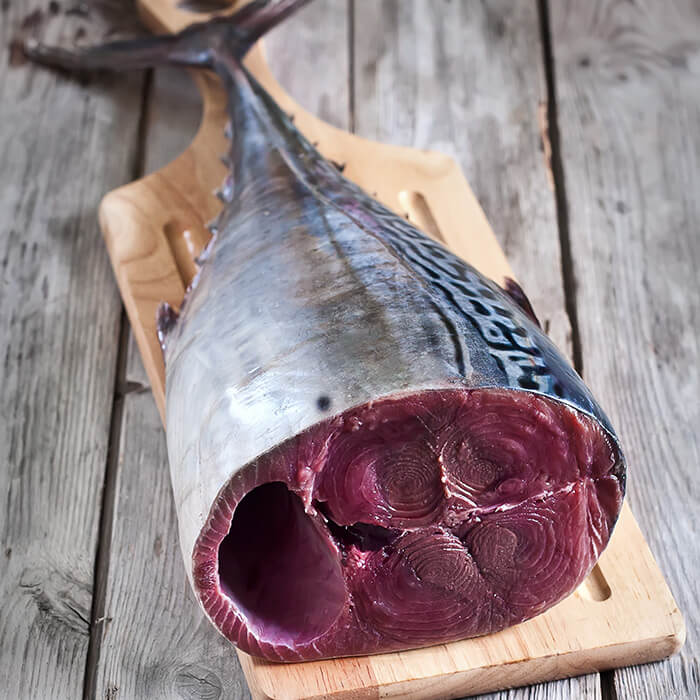 Some dogs have food allergies, and fish is one of the most common triggers. For this reason, you should feed fish to your dog in small amounts, especially if it is his first time eating one.

After he finishes his meal, keep a close eye on him. Take your dog to the vet right away if he starts showing the following symptoms of an allergic reaction:

Consuming too much tuna can cause thiamine (vitamin B1) deficiency in dogs. It is due to the presence of an anti-thiamine enzyme called thiaminase in raw, dead fish, including tuna. Fortunately, thoroughly cooking the fish breaks down the enzyme and renders it useless.

Plastic has become a big problem caused by pollution. Some are thrown haphazardly in various bodies of water and often become fish food. Like many fish, tuna tends to feed on plastic mistakenly.

Keep in mind that various human wastes are also found in plastic, which the fish may accidentally consume. These may end up in your dog’s tummy and put him at risk of many illnesses.

Can dogs have tuna fish occasionally? 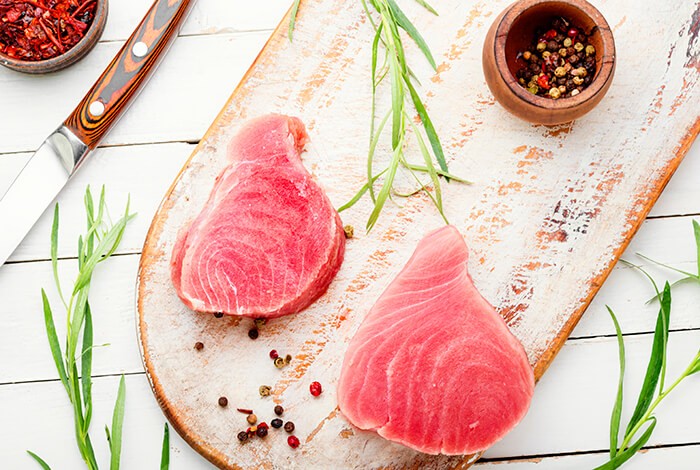 Dogs can have tuna fish, but it should be done occasionally. Do not let it comprise a big chunk of your dog’s meals. Adult dogs should eat tuna no more than once or twice a week.

It’s best not to give tuna to puppies, as they have more sensitive stomachs than full-grown dogs. Changes in their meals can easily result in digestive problems.

Before incorporating tuna fish into your dog’s diet, ask for the vet’s opinion first. You must ensure that it is a suitable snack for your dog according to his health condition.

If the vet approves, feed your dog tuna gradually. This will allow their digestive system to slowly get used to the new food and prevent digestive upset. 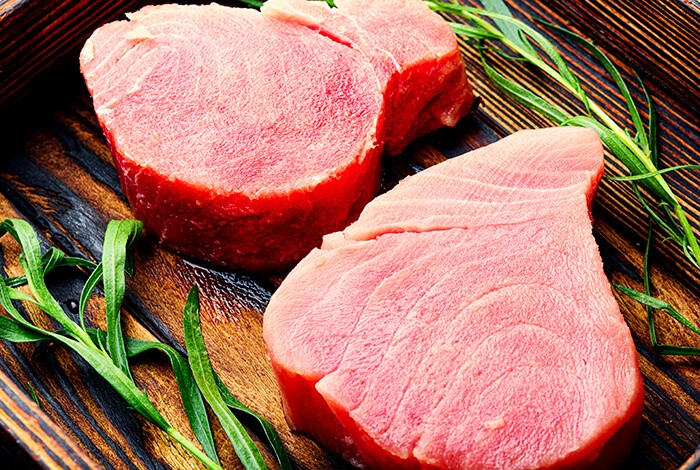 Raw tuna and other raw fish are not safe for dogs. As mentioned earlier, they contain thiaminase, which can cause thiamine deficiency. Aside from that, it also puts them at risk of contracting infectious bacteria and parasites.

Therefore, it is best to cook tuna or any other type of fish before giving it to your dog. Make sure to remove fish bones to avoid choking and mouth and intestinal injuries. Serve it plain and free from added ingredients.

Do not use salt, spices, garlic, chives, and onions. They are more likely to harm your dog and cause health issues such as digestive problems, toxicity, and obesity. 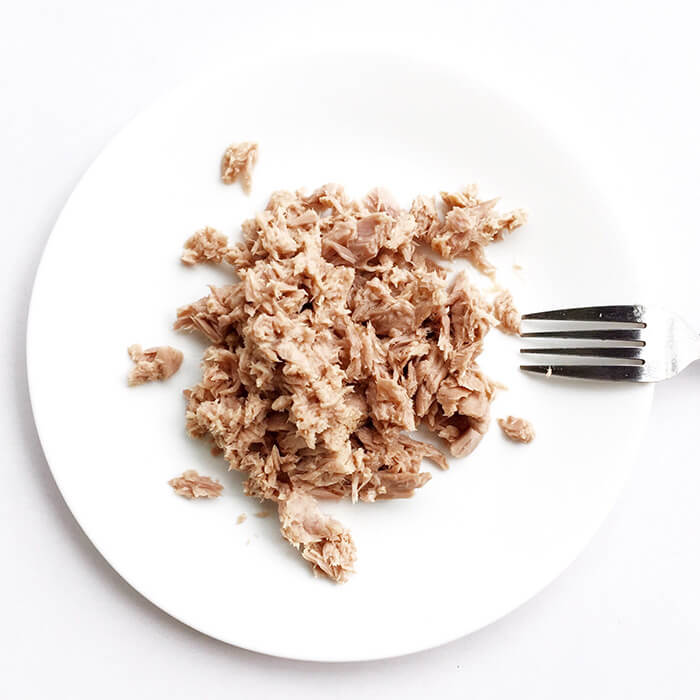 Canned tuna is unhealthy for your dog. It has added salt, which can cause kidney stone formation, pancreatitis, and sodium toxicity. Some suggest opting for canned tuna, wherein the fish is packed in water minus the salt.

However, it is important to note that canned food is also full of preservatives. Some canned tuna and preserved meats also use sulfite, a preservative that causes thiamine loss in food.

A study also showed that, in some cases, dogs and cats exhibited symptoms of thiamine deficiency after consuming sulfite-preserved meat as the main part of their diet.

So, it is better not to let your dog eat canned tuna. Just let him enjoy snacking on plain and cooked tuna occasionally instead. 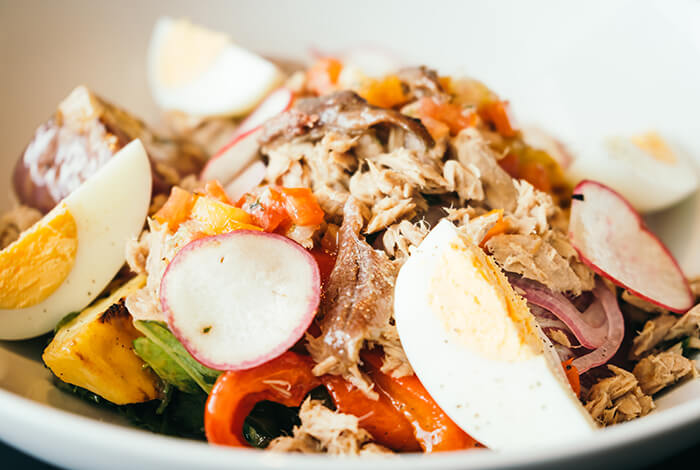 Keep store-bought tuna salad away from your dog. It often comes with spices, garlic, and onions. These may not only irritate your dog’s digestive tract but may also lead to poisoning.

If you want to share tuna salad with him, it should be plain and homemade so you know it is safe for your dog to eat.

Can dogs eat tuna with mayo? 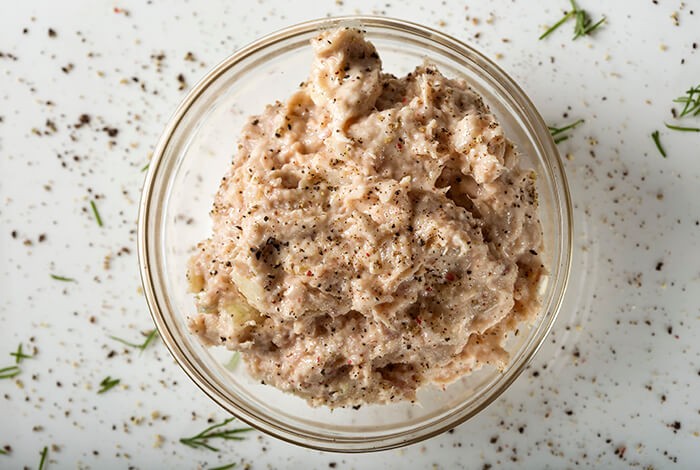 For a similar reason above, it is best not to feed your dog tuna with mayo. It is high in fat too, which is bad for him.

You can share homemade tuna and mayo with your dog but be mindful of how you feed him. Feeding too much tuna with mayo may result in stomach problems.

How to prepare tuna for dogs 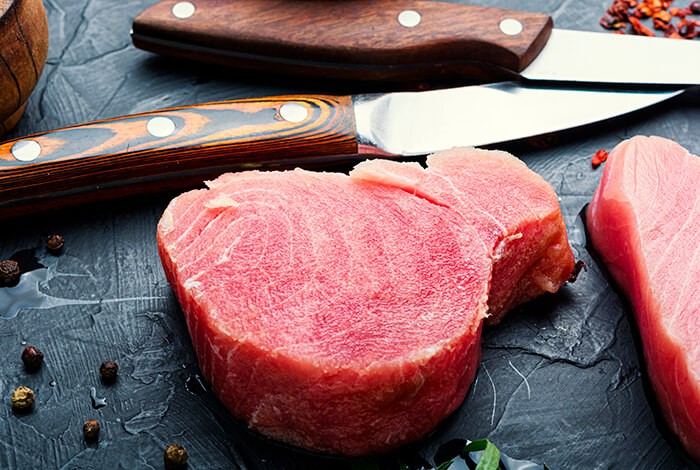 Below is a list of things to consider when thinking, ‘How do I feed my dog tuna safely?’

Choose a type of tuna that has lower amounts of mercury. Skipjack and albacore are great options. Other types of fish such as Arctic char, flounder, herring, salmon, or whitefish are safer for your dog too.
Always completely remove the fish bones. If possible, buy boneless tuna fillets as it makes preparing the fish for your dog less tedious.
Tuna for dogs is best served plain and cooked. Avoid oil, salt, garlic, onions, chives, and other seasonings. Your pooch will still enjoy eating the fish without these ingredients.
Overfeeding your dog tuna can lead to severe health problems. Therefore, only serve it in small amounts as a special treat. 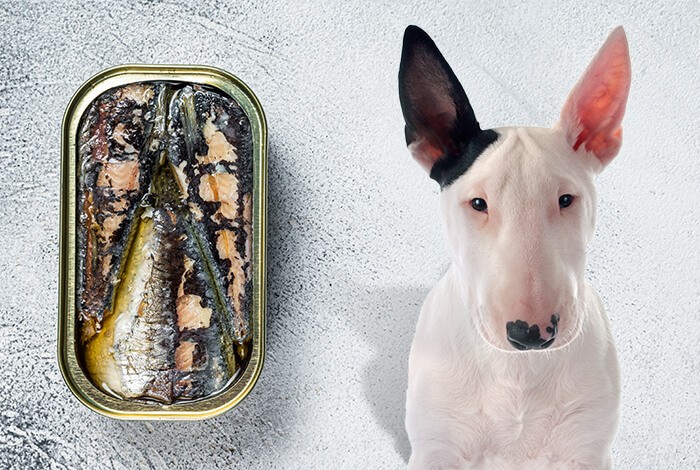 Can Dogs Eat Sardines? The Good, The Bad and the Fishy

When prepared properly, Sardines offer many health benefits to dogs. 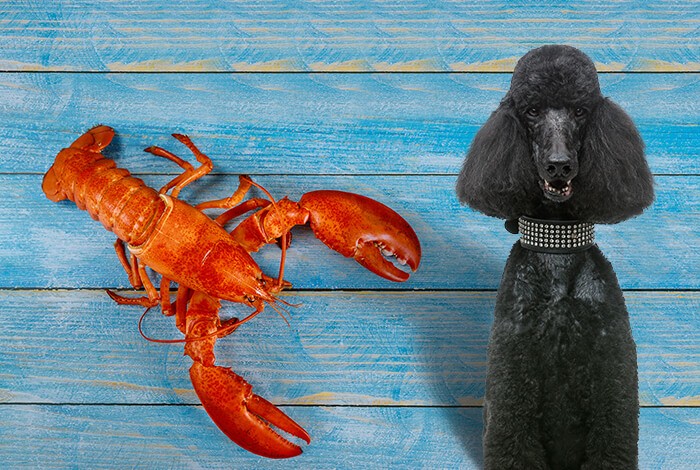 If you are not careful, feeding lobster to your dog can lead to major health issues.